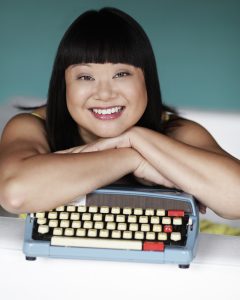 MARJORIE CHAN 陳以珏 Marjorie is a multidisciplinary artist born in Toronto to Hong Kong immigrants who arrived in the late 60s. Her works for the stage have been performed in the United States, Scotland, Hong Kong, Russia and across Canada. Her full-length works as a playwright include the plays The Madness of the Square, a nanking winter, Tails From the City, as well as the libretti for the operas, Sanctuary Song, The Lesson of Da Ji, M’dea Undone and most recently, The Monkiest King. In Hong Kong, Marjorie directed Knives in Hens and A Doll’s House for Theatre du Pif. Marjorie has been nominated for 9 Dora Awards and is the recipient of four (3 for libretti, 1 for performance). She has also received the K.M. Hunter Artist’s Award in Theatre, the Entertainment World Award for Best New Work, a Harold Award, as well as the George Luscombe Award for Mentorship. Other notable nominations include the John Hirsch Directors’ Award, the Governor General’s Literary Award for her playwriting debut, China Doll, and the Canadian Citizen Award for her work with Crossing Gibraltar – Cahoots Theatre’s program for newcomers. She has been artist-in-residence with Factory Theatre, Banff Playwrights’ Colony, Tapestry Opera, Cahoots Theatre, Theatre Centre (with 6th Man Collective), Theatre Direct Canada, SUNY (Geneseo, New York) and Theatre du Pif (Hong Kong). Upcoming projects include her new play, Lady Sunrise (Factory Theatre). She is the current Artistic Director of Theatre Passe Muraille in Toronto.